(Several updates below. Scroll down.)

The Monday before we left Nashville, we had a birthday party for Alex at an inflatables place called BounceU. He will celebrate his fourth birthday in Portugal, but we wanted to give him an opportunity to have fun with some of the friends he's made at Hillsboro in the last few months before we left.

The kids enjoyed an hour in the bounce room, followed by 30 minutes in the party room. Snacks and drinks were served, followed by cake. Alex requested a firetruck cake, and it was pretty yummy! Although I enjoyed doing his party and his cake myself last year, it was nice this year, especially since we're in the middle of moving overseas, to have someone take care of all the details for me. We'll probably have a family party when we get to Portugal, and Alex has already asked if I can make him a Toby cake. (Toby is one of the Thomas trains.) We'll see, sweet boy. Let's get to Portugal first and see if I'm still sane! 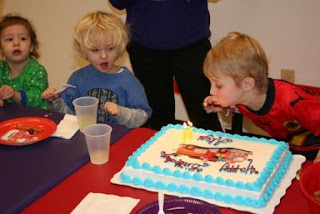 Stephen was 10 months old on February 6th. He had his 9-month check-up on Feb. 4th, got caught up on all his shots, and weighed in at:

He is definitely a long and lean baby. (By comparison, Alex was quite chunky as a baby and weighed several pounds more at the same age.) Stephen is now wearing 12-month size clothes. He is pulling up and cruising, but has shown no interest in walking yet. Not that I'm complaining -- I'm perfectly happy for him to wait to do that for awhile. He still has just two teeth, and he still sucks his thumb.

Due to all the craziness of the last month, I don't have many pictures of Stephen by himself. (All right, truth be told, I don't have pictures of much.) But here is a picture of both the boys wearing their matching shirts that Nyanya gave them for Christmas. 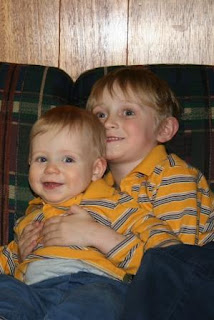 Handsome boys!
Posted by Campbell Family at 2:35 PM No comments:

Well, I promised updates, so, although we are leaving for the airport in about an hour, I'm trying to deliver!

During our last month in Nashville, we were blessed with visits from two of the families on our team, the Meyers and the Reeses. The Meyers came to visit in January, and the boys had a ball playing together. The weather was especially gorgeous one day, so the kids enjoyed playing outside. Another day, we went to the Monkey's Treehouse. We also tried out a local Ethiopian restaurant. Robert and Rusty played disc golf one morning, and we enjoyed several games of Settlers of Catan in the evenings after the kids were in bed.

The Reeses came to visit the first part of February. Due to the fact that several of us were sick, we didn't do very much in the way of fun and exciting things. But we enjoyed visiting and playing Settlers. Danny helped Rusty move a bunch of our stuff to storage. And of course, Alex and Eliana enjoyed playing together. 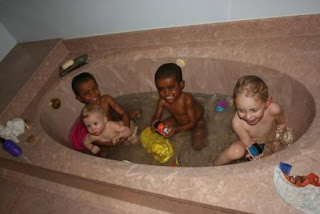 Four boys in a tub = chaos 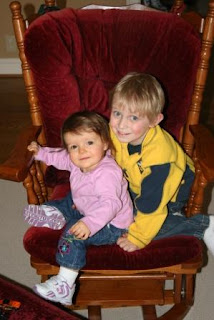 Alex and Eliana
Posted by Campbell Family at 2:24 PM No comments:

Updates on the Way

Yikes! Has it really been over two weeks since I posted to our blog? Sorry, loyal fans -- the last month has passed in a whirlwind of packing, cleaning, and moving out of our house, saying goodbye, and running countless errands. We left Nashville yesterday morning and made the drive to Detroit, where we are visitng my parents for a few days before we fly to Lisbon next week.

We have been without reliable Internet service for over a week, but now that we are at my parents', we can catch up on email, Facebook, and of course the blog! Pictures and updates coming soon...
Posted by Campbell Family at 1:29 PM No comments:

Email ThisBlogThis!Share to TwitterShare to FacebookShare to Pinterest
Labels: Moving

...there is more of this in my future: 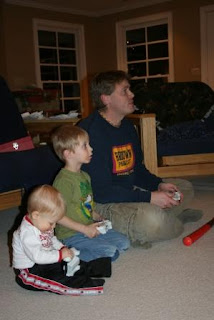 You won't catch me complaining, though -- I've about decided that X-box time for the boys = scrapping time for me! 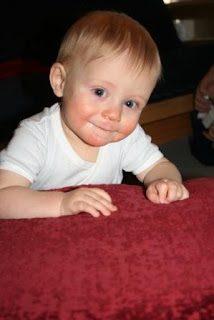 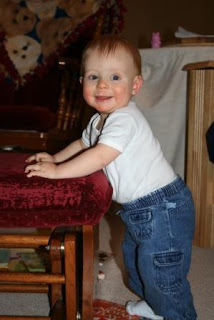 Yes, as you can see, the big skill Stephen learned in his ninth month was to pull up to a standing position. He pulls up on everything -- this ottoman is a favorite because he can stand there and rock back and forth with it. He also likes the train table and whoever's pant leg happens to be close by (usually mine).

Another discovery this month was the stairs -- he can go up very well, although he exerts a considerable amount of effort to do so. He is turning into a little bit of a mama's boy. I wouldn't say he's having true separation anxiety yet, but often when I walk out of the room, he cries. Lately, he has taken to crawling around the house after me like a little puppy dog and fussing if I don't pick him up.

This month, Stephen also transitioned out of his infant carseat. He was just getting too wide for it and would cry every time we would strap him into it because he was so uncomfortable. Basically, we moved Alex to a big kid booster seat (which he was super excited about) so Stephen could have Alex's old convertible-type carseat.

Stephen has two little teeth on the bottom, and more on the way (I think). He eats with gusto and is developing quite the "muffin-top" to prove it. Still nursing 4-5 times a day, plus at night. At this age, Alex was already starting to wean himself and I was gradually replacing nursing sessions with bottles of formula. I kind of thought Stephen would do the same thing... but, when I tried to give him formula, he turned his nose up at it. I did finally get him to take a little bit one time, and he gagged and then promptly threw up all over me! So, we'll be sticking with nursing for now. Maybe I'll actually make it to one year with this one. I'm not even going to think about weaning until we're settled in Portugal and life starts to feel normal again.