I promised more pictures of Sintra, where we went for our field trip at the end of May. About a 40-minute train ride from Lisbon, Sintra has a lot to see and do. On this day, we toured the Palácio Nacional de Sintra and afterwards shared a picnic lunch in a nearby park. Rusty and I were so impressed with Sintra, though, that we took the train out there again the very next day on a spur-of-the-moment anniversary getaway. (Robert and Teague offered to keep our kids overnight -- can't turn down an offer like that!) We didn't do anymore sightseeing -- just enjoyed walking the streets in the cool of the evening, savoring the peace and tranquility, and eating a delicious dinner. I think we are going to try to go back sometime when we can bring Alex (he was in school the day of the field trip) and tour the Moorish castle.
The pictures below are some of the best shots from both days. 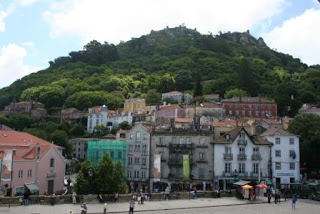 Sintra from the steps of the Palácio -- you can see the walls of the Castelo dos Mouros (Moorish Castle) snaking along the crest of the hill. 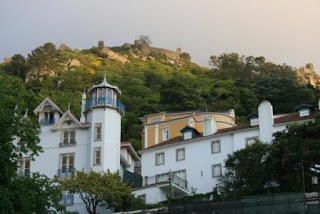 View of the hill (and the castle atop it) from directly below. 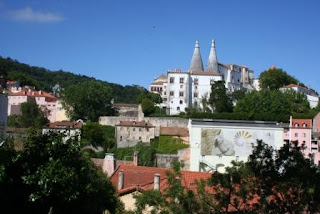 The Palácio Nacional (National Palace) is well marked by its conical twin chimneys. 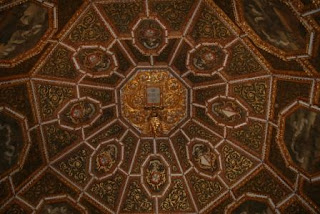 Before we toured the palace, Eunice told us to be sure to look up (at the ceilings) and down (at the floors) as we went through because many of them are very elaborate. In this, the Sala dos Brasões (Coat of Arms Room), the ceiling displays the shields of 74 16th-century noble families. 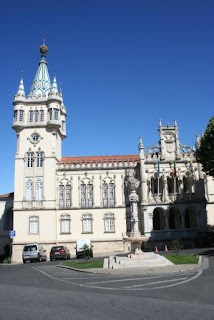 Email ThisBlogThis!Share to TwitterShare to FacebookShare to Pinterest
Labels: Anniversaries, Life in Portugal

Top Ten: Together in Portugal

On May 4th, the Reeses and the Meyers finally arrived in Portugal after months of waiting. For the first time in our history, the entire Angola Team is now living in the same city! (Technically, I guess that's not true right now because our family is in the States for the next several weeks.) We have really been enjoying being together, and have tried to implement a schedule that makes time for "business" meetings as well as fellowship and fun activities -- in addition to language classes and study time, which is, of course, our primary purpose for being in Portugal. 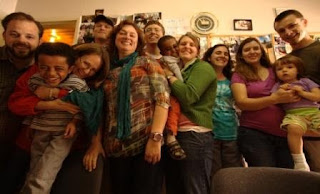 The Angola Team, sans Alex and Stephen, with our teacher, Eunice (This picture was taken the morning after the Meyers and Reeses arrived.) 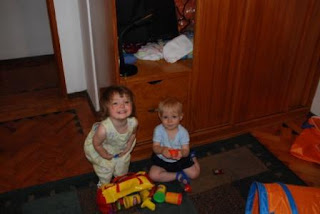 Danny and Katie have started watching Stephen for us three days a week while Rusty and I are in class, to help us save money on childcare. Eliana and Stephen are getting to be great buddies. 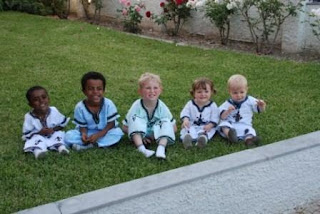 All the kids in their Ethiopian outfits (a gift from the Meyers) at one of our Monday team meetings. 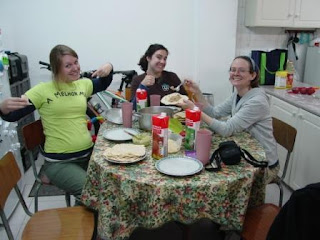 One Friday a month is Girls' Night Out, and the guys keep the kids. On this night, we made a mountain of tortillas (some to eat, some to take home), ate dinner together, and then watched the new BBC version of "Emma." 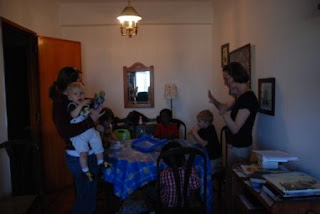 One Friday a month is Guy's Night Out, and the girls keep the kids. The girls decided to have a little Bible class for the kids on these nights and rotate the teaching responsibilities. This was our first lesson, and I taught Noah and the Ark. 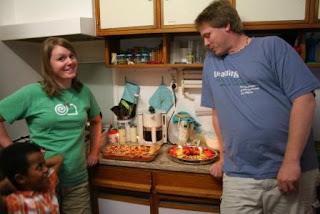 On the other Friday nights, we have a team dinner and fellowship at our house. This particular night included birthday celebrations for Rusty and Teague. 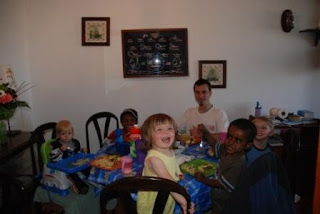 Every other Saturday is Date Night. One couple keeps all the kids for the evening so the other two couples can have a night out. On this night, while our kids were hanging out at the Reeses', Rusty and I enjoyed dinner at Chili's and going to see the new "Robin Hood." 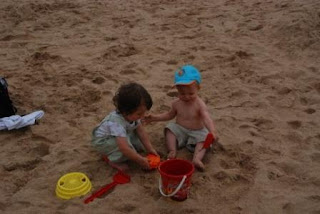 On the other Saturdays, we have a team outing. Here are Eliana and Stephen digging in the sand on our first trip to the beach... 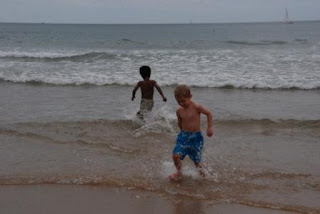 ...and Alex and Efesson chasing the waves. 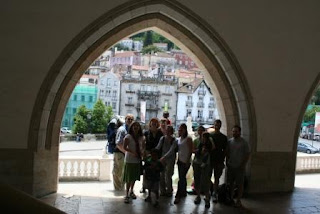 At the end of May, we had our first field trip all together. We went to Sintra, about a 40-minute train ride from Lisbon. More pictures to follow in another post. This was the group shot in front of the palace we toured.
Posted by Campbell Family at 10:08 PM No comments:

Yes, that's right. "Baby" Stephen is officially a toddler now. He had been taking a few steps here and there for awhile. But he required a great deal of praise and encouragement to do so, and usually preferred just crawling everywhere. However, around the first part of May, he really took off and started walking all over the house. I just love the stiff-legged zombie walk that babies do when they are first learning! I'll try to post a video soon.

Stephen is also talking quite a bit. Most of it is just baby babble of course, but there are a few words he says quite clearly -- ba (ball), caca (cracker), sheesh (cheese, which we've decided is his all-purpose word for food), jush (juice), uh-oh, mama, and dada. He does the baby signs for "more" and "all done," waves bye-bye, and has just started giving big, slobbery kisses on the cheek when prompted.

We are pretty much done nursing. Weaning has drug on longer than I would have liked because Stephen had a little trouble learning to drink cow's milk. He refused it for the longest time until I started putting a tiny bit of chocolate powdered drink mix in his cup (not trying to make chocolate milk, just trying to sweeten it a tad). Once he was drinking that well, I weaned him off the chocolate powder. Now he tolerates the milk, but I think he still prefers juice or water. If I can get him to drink one cup a day, I'm happy -- I figure he's getting calcium from plenty of other sources.

At the beginning of May, we finally got around to celebrating Stephen's first birthday (over a month late, but he's too young to know the difference!). We waited until the rest of our team arrived in Portugal, so the other children could be a part of the celebration. We had a breakfast party with chocolate chip banana muffins, fresh fruit, chai, and coffee. In lieu of gifts, everyone brought a small item for Stephen's baby time capsule, to be opened on his 18th birthday. We did something similar for Alex on his first birthday, and wanted to continue the tradition. Stephen also got a couple of sets of Duplos from his Nyanya and Babu, as well as a cool ride-along train.

I enjoy watching Stephen achieve all these new milestones, but at the same time, I find myself feeling a little nostalgic, mostly because I wonder often if Stephen will be our last. We haven't yet decided if we want to try to have anymore kids. It's funny -- I always said I wanted at least 4 kids, but the more I think about it, the more I wonder if having a large family is really practical, considering our lifestyle. I know plenty of missionary families who have several kids, and they make it work... but Angola is so danged expensive. More kids means a bigger house (housing is the biggest line item in our budget), and also more expensive furloughs. It's already going to cost a small fortune to bring our family of four back to the U.S. every three years. I shudder to think of what it would cost if we had to pay for 6 tickets rather than 4.

So, the conversation about family size is one we have often right now. I remember a day back in January, when, probably in the middle of packing some awkward baby item, Rusty came marching upstairs and informed me that I needed to decide right then and there if we were going to have anymore kids, because if we weren't, we didn't need to take all this baby "junk" (he used a stronger word) to Angola. To which I replied that I was in no state to make that kind of decision right then. And anyway, as far as I'm concerned, you take the stuff with you as insurance, because we all know people who said they were done, got rid of all their baby gear, and then, "Oops, we're pregnant again!" If we don't have anymore kids, we'll give our baby stuff away in Angola to people who need it.

Rusty thinks it would be cool to have a baby on every continent we live on (Asia, North America, Europe, Africa). I think he's out of his mind. Truly, if I end up pregnant while we're here in Portugal, trying to learn another language, without maternity coverage, I think I might just have a nervous breakdown. However, I wouldn't mind having another baby once we are settled in Angola. But I think I could also honestly say that I would be just as happy if our family just stayed the size it is. I just want to do the best job I can with the two precious sons the Lord has already entrusted to me rather than worrying about when / if I'll have anymore.


Well, I'm not quite sure how a post that was meant to be about Stephen ended up here. If you're still reading this, then thanks, I knew you loved me! I'll leave you with a few pictures of the littlest Campbellite since this post was supposed to be about him: 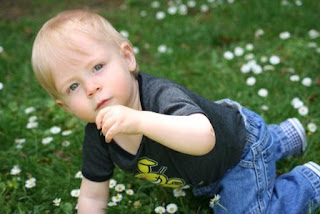 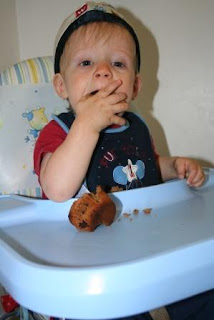 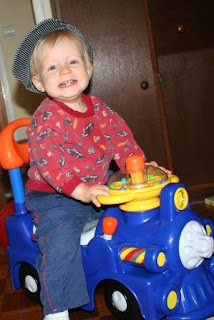 Our little engineer!
Posted by Campbell Family at 5:55 PM 2 comments:

At the end of April, we went on our second field trip with Eunice. She took us to Alcobaça, about an hour's drive north of Lisbon, and to Nazaré, on the coast. Here are my "top ten" pics from this day: 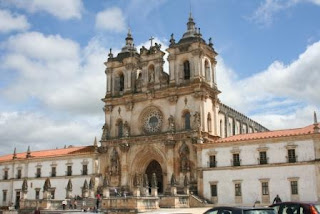 Alcobaça is home to the colossal Mosteiro de Santa Maria, a church and former monastery, which we toured. 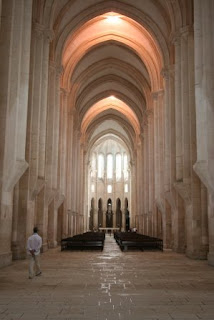 The inside of the church was very cool. The ginormous columns reminded me of something out of "Lord of the Rings." 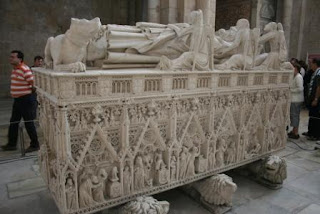 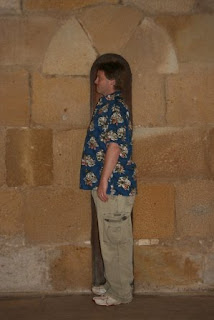 The monks had to enter the dining room through this narrow doorway. If you couldn't fit through, you were forced to fast! 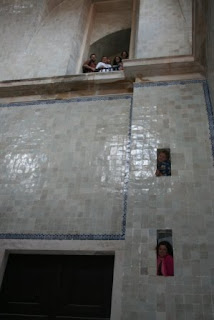 At the top: Nathan, Doug and Mira Gentry, Jordan, Laura. In the windows: Rusty and Eunice. 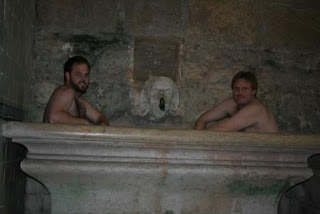 Rusty and Nathan being goofy in one of the giant stone sinks in the kitchen. 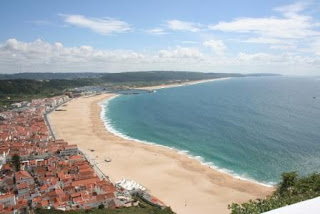 After lunch in Alcobaça, we drove to Nazaré, a picturesque coastal town. The view from the cliff-top above the town was amazing. 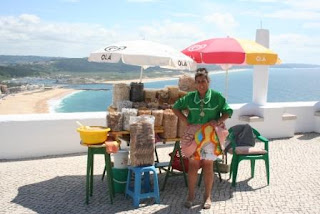 One of the local women selling nuts and figs. She is in traditional dress -- a skirt with seven petticoats. 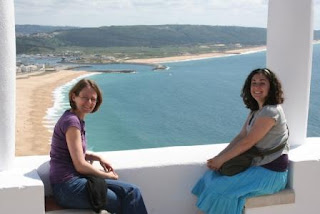 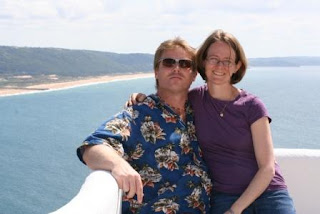 This picture is going in our Wedding Anniversary scrapbook for year 11!
Posted by Campbell Family at 9:40 AM 2 comments: