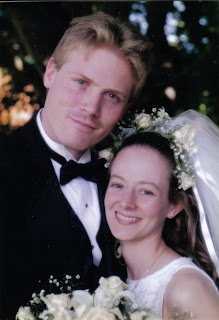 Email ThisBlogThis!Share to TwitterShare to FacebookShare to Pinterest
Labels: Anniversaries

The next stop on our journey was Abilene, TX, to see my brother Matt graduate from ACU. We also enjoyed reconnecting with our old friends, Steve and Wendy (from our days as AET's in Japan). It was such a delight to see how their family has grown since the last time we saw them. The kids had a good time playing together. (Sadly, though, we took no pictures of our time with Steve and Wendy.)

My sister and her three girls were able to travel to the States from Bolivia for Matt's graduation, and then spent a little over a week with us in Detroit before they went back. Here are a few pictures of our time in Abilene: 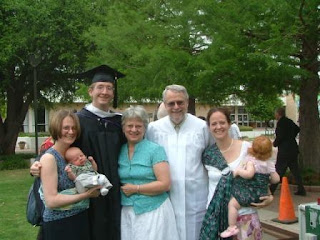 The Stephens family (plus two grandkids) 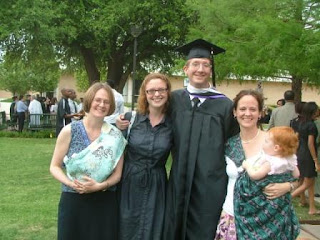 The lovely lady in the black dress is Janille, my brother's girlfriend. It was a real treat to (finally) meet her while we were there.

We were in Abilene over a Sunday, which happened to be Mother's Day. Since Julie and I now have 5 kids ages 4 and under between us, we decided to forego going to a nice restaurant (which can be torturous when you have young children) and just got a bucket of chicken and went to a local park. The kids had a great time, and the adults were able to squeeze in some good conversation while they were playing. 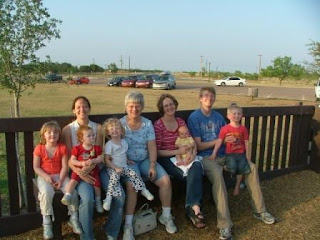 My mom with all her kids and grandkids on Mother's Day 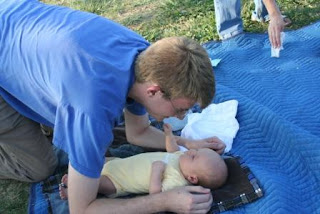 "Dude... they tell me we're related." Stephen and Uncle Matt getting to know each other 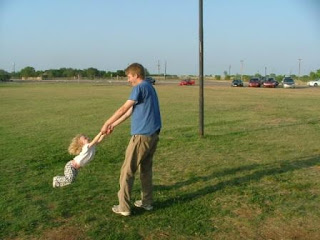 More pictures of our time with Aunt Julie and the cousins to follow. I am working on a slide show and should have that up in a couple of days.
Posted by Campbell Family at 2:31 PM 1 comment:

At the beginning of May, our entire team (minus Jordan) was privileged to present at the annual Pepperdine Bible Lectures. We taught a class entitled "New Strategies for New Fields in Africa: The Case of Angola." (The class is available for purchase on CD for those who are interested. Click here to order.) We had a pretty good turnout and were well received. We also hosted an informational breakfast one morning.

I cannot say enough good things about the Pepperdine Bible Lectures. I really hope that we are able to attend them again one day. They had an awsome children's program (which was also amazingly affordable), so Alex was occupied and entertained. And this meant that I was able to attend some classes and keynote sessions and participate in the worship times -- wonderful! Of course, for Rusty and I, it was also a time of reconnecting with many of our friends from the Northwest, as well as people with ties to Africa and Japan. And it's hard to beat the locale -- sunny Malibu, California. The Pepperdine campus overlooks the beautiful Pacific Ocean, and the views as we walked or rode the shuttle bus were just stunning. Lots of stairs, though! If you go there with children, don't take a stroller. I was glad we didn't bring ours. Alex either walked or rode in the Kelty backpack, and Stephen was happy in the sling.

Here's a picture of our team at Pepperdine, along with Charles Kambungo and Andre Banda, Angolan friends and future partners in ministry, who were able to travel to the U.S. to attend the Lectures and also a Church Planting Movements conference in Dallas. It was a real blessing to have them here. 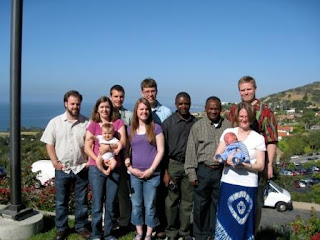 Life at One Month

Stephen is now well over one month old (he will be exactly 7 weeks old tomorrow) -- however, I intend to continue the tradition I started during Alex' first year of doing Month Milestone posts. (I am a bit behind in my blogging since we have been traveling and then my sister and her kids were visiting for a week.)

In his first month of life, Stephen has traveled to Coldwater to meet his great grandmother, to Memphis for Daddy's graduation, to Nashville for Mommy and Daddy's Angola presentation, to Texas, where he got on a plane for the first time, and to sunny California for the Pepperdine Lectureships. Everywhere we went, people were amazed that we were already traveling with such a young baby. "Wow, you're brave," they said. Brave... or crazy? Honestly, now that I have a 3-year old, I find traveling with a newborn to be easy. They aren't mobile; they sleep anywhere; you don't have to worry about a schedule since they don't have much of one yet; and they don't need to be entertained. He was a joy to have along on our trip, and we were glad to get to introduce him to so many of our friends and family during our travels.

Stephen is really a very laid-back baby. I think he might be even more laid-back than Alex was as an infant (although that may very well be because I am more laid-back as a mom with my second than I was with my first). I have been pleasantly surprised at how much easier things have been this time around. Nursing got off to an easier, better start, probably because at least one of us knew what we were doing this time! I seem to be handling the sleep deprivation and wacky schedules better. There is nothing that really prepares you for the way that first baby rocks your entire existence... but the transition to being a family of four has (so far) been much less overwhelming.

At his one-month check-up (which was actually at more like 5 1/2 weeks because of our travels), Stephen weighed in at a whopping 11 lbs. 4 oz. That means he gained almost 3 pounds in his first month of life (Alex only gained two). It goes without saying that this kid loves to eat! He also loves to be held and snuggled, laying in his cradle and watching his mobile, taking a bath, and riding in the sling. He is already a great traveler, which is a good thing since there is certain to be a lot of that in his immediate future!

Here are a few pictures from his first month. 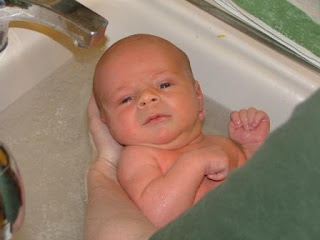 Having a bath in the kitchen sink 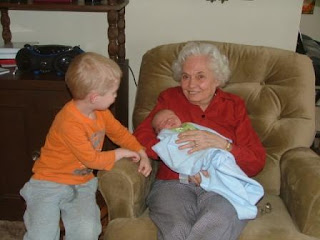 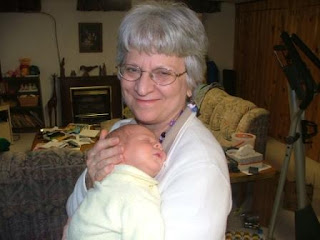 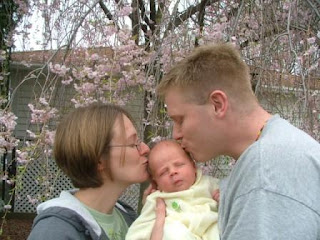 Being loved on by Mommy and Daddy 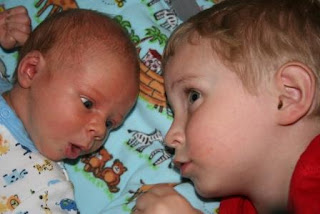 Napping on a Sunday afternoon 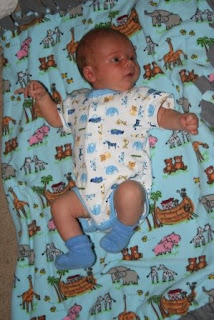 One month old
Posted by Campbell Family at 4:36 PM 5 comments:

On Saturday, May 2nd, Rusty graduated with his Master of Arts in Christian Ministry from Harding University Graduate School of Religion. The HUGSR chapter of our lives began nearly 7 years ago -- in 2002 when we returned from our three years in Japan as AET's. We arrived in Memphis on a hot August day with no jobs and nearly no money, only knowing a few people. Seven years later, we are once more unemployed and poor (financially speaking), but rich in the relationships we have formed and the experiences we have had during our time there.

In the years since Rusty first began taking classes at HUGSR, we have gone on a Let's Start Talking campaign to Kampala, Uganda, spent two years working with a church in northern Mississippi, spent another year doing vocational ministry in Japan, joined the Angola team, gone on a month-long survey trip to Angola, and had two precious sons born to us. It has not always been an easy journey. We have moved several times, twice internationally, cared for a dying parent, struggled through the loss of Rusty's mom, as well as our home and life in Japan, been without a home of our own for months at a time, been unemployed or worked jobs that didn't pay much just to make ends meet, and experienced financial stress and uncertainty. And all of this in addition to the normal stresses of graduate school -- hundreds of pages of reading to do each week, exams to study for, papers to research and write.

Through all of it, even during the semesters when Rusty couldn't take classes for one reason or another, I don't think either of us ever doubted that he would one day finish. But I think we both began to wonder when that day would come, especially as the 2-3 years we thought it would take stretched into 7. Rusty found the work of grad school much more difficult than he had anticipated. Some people thrive on study; Rusty is not one of them. There were many times when he felt like a round peg trying to fit in a square hole, when he got discouraged and wondered if he was cut out for this. But he stayed the course and finished what he had started. Watching him walk across that stage to receive his diploma was one of the proudest moments of my life.

Rusty wasn't the only one to receive a degree on May 2nd. At the luncheon for the graduates and their families following the ceremony, I received my PHT (Putting Him Through). After seven years of working to help pay the bills, staying up until the wee hours of the morning proofreading papers, and listening to him gripe about how hard his classes were, I definitely feel like I earned it! Congratulations, Rusty! It has been a privilege and an honor to "put you through" grad school, and I am so very proud of your achievement. 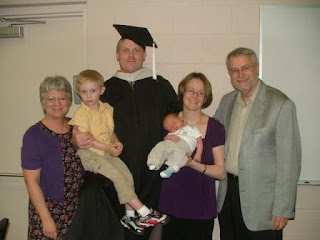 Our family with my parents just after the ceremony 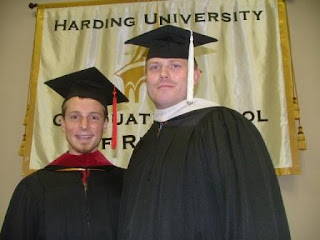 A Day Out with Thomas

One of the things I am especially grateful for during this time of transition in our lives is all of the time Alex is getting to spend with his grandparents. I realize that once we are living overseas again, our times with them will be few and far between. I am glad that Alex has had several months to make special memories with his Nyanya and Babu, and also that he is old enough that he will remember them later on.

On the last Saturday in April, Nyanya and Babu took Alex on the ultimate "grandkid date" (at least in this 3-year old's mind). They bought tickets to "A Day Out with Thomas" at Greenfield Village. The highlight of the day was, of course, getting to ride Thomas, but there were also train tables and trains for the kids to play with, motorized cars to drive, and other activity centers and photo ops. Alex had a great time, and he still talks about it almost a month later. 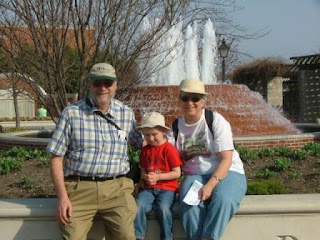 Alex with his grandparents 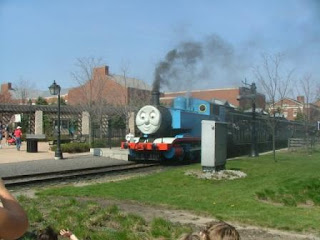 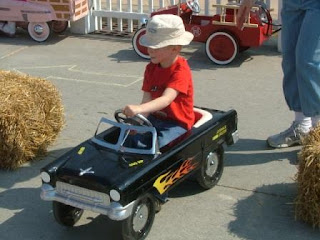