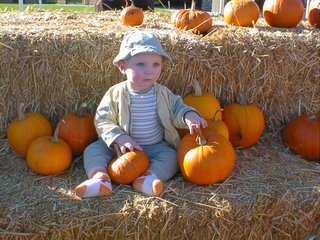 We went to the Pumpkin Patch hosted by the Vancouver Church of Christ to pick out our Halloween pumpkins. It was a perfect fall day, warm and sunny. Alex helped us choose a pumpkin for each member of the family, including a small one for himself! But I think Mama will have to help him carve it! He loved sitting on the hay bales and playing with the bright orange pumpkins. 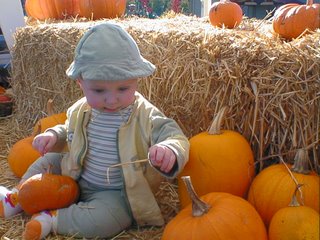 Alex also tried hay for the first time! After much deliberation, he determined that he would leave the hay to the horses and stick to foods like sweet potatoes and applesauce. But it sure was fun to play in.

I love fall! And I love watching my baby explore and learn about the world around him! 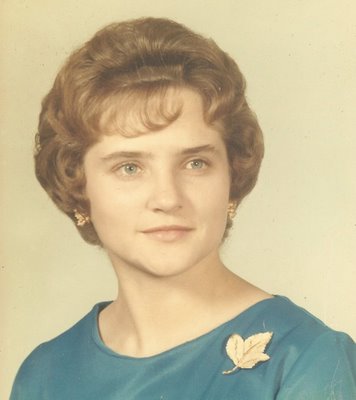 Mary E. Campbell, born September 17th, 1942 of Aaron B. Stanes and Luella M. Falk, went to Heaven at 12:37 a.m. in her home, Oct. 3, 2006. With her son, daughter, three grandchildren, and daughter-in-law at her side, she went peacefully after suffering from a glioblastoma multiforme brain tumor found June 28, 2006.

Mary's passion, besides her family and her faith, was teaching. She became part of the Portland public school system in 1981. She was a well-known substitute teacher in many school districts throughout Oregon. She touched the lives of many children, especially those with special needs or those that just needed a hug. She was always willing to help in any way she could, whether with food, money, clothing, shelter, or spiritual uplifting.

Mary was preceded in death by her beloved husband, Johnny R. Campbell. She is survived by her daughter, Ronda Stefan; her son, Rusty Campbell and daughter-in-law, Laura Campbell; and her three grandsons, Robbie Stefan, Johnny Stefan and Alexander Campbell, all of Portland. She is also survived by four brothers, Ronald Starnes of Lewiston, Idaho; Kenneth Starnes of Manson, Manitoba; Lyle Starnes of Dechard, Tenn.; and Willis Starnes of Irving, Texas.

Donations in Mary's honor should be made to Columbia Christian Academy or the Johnny and Mary Campbell Endowment Fund for Handicapped Students at Cascade College.

(The above obituary was written by Ronda and appeared in the Oregonian on Friday, October 6th.)
Posted by Campbell Family at 7:40 PM 3 comments: 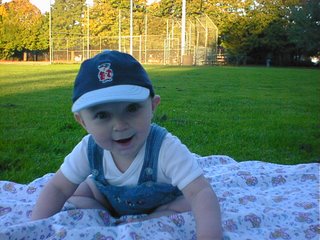 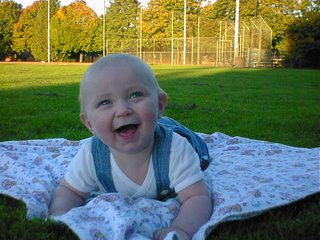 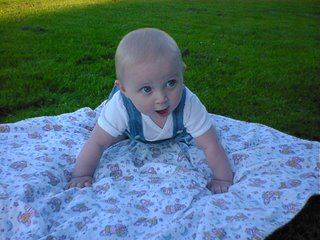 I am seven months old and just as cute as can be. I weigh 20.5 pounds (nearly triple my birth weight) and am 27 inches long. I am in the 95th percentile for weight and the 75th percentile for height. My mommy and daddy can't believe how big I am getting. Our shipment with my 6-9 month size clothes got here just in time. I was about to bust out the seams on all my 3-6 month clothes!

I love trying new foods, playing with my rubber duckies in the bath, watching "Sesame Street," and cheering for my cousins at their soccer games. They are the star players on their team. I want to be just like Robbie and Johnny when I get big. I can push up into a crawling position now, and I know I am supposed to be able to go places on my hands and knees, but I am having a hard time figuring out how to coordinate everything. Sometimes I get really frustrated, so I just start yelling. Then my mommy or daddy comes and rescues me.
Posted by Campbell Family at 5:44 PM 3 comments: 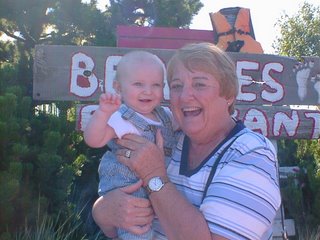 This dear lady, from the church Rusty used to work for in Mississippi, was in Oregon recently visiting her cousin who lives in the area. We met up for lunch one day at Beaches, a restaurant on the Columbia River. Earline enjoyed the distinctive honor of being the first person from "down South" to hold and play with our little munchkin. So good to see you, Earline!
Posted by Campbell Family at 5:33 PM No comments: