We’ve been in Quito nearly two weeks already, so it’s high time for an update! It’s been a busy two weeks settling into life here. We arrived in Quito on April 12th (actually it was early in the morning on April 13th). Our plane was rerouted to the city of Manta on the coast of Ecuador due to bad weather when we were on our approach into Quito. After spending some time on the ground refueling and dealing with a medical emergency (not ours), we were finally able to fly back to Quito and this time, successfully landed. All of our luggage made it intact, and Josh was waiting at the airport to take us to their house.

We spent the first few days living with Josh and Julie (my sister), and it was a nice way to recover from the trip as well as the craziness of the last few days in the States. It also gave us an opportunity to take care of things like making sure we had working cell phones and a drivable vehicle – after sitting for several months, our Land Rover was in need of some TLC, as well as insurance. We learned our way around the Marcum’s neighborhood, and I even made my first foray into a local grocery store. For some reason, grocery shopping is just one of those things that is always completely overwhelming and stressful to me in my first few weeks in a new country. We went to church with the Marcum’s (they attend a church plant in “the valley”) and attended their small group that meets on Wednesday nights. The cousins also enjoyed some concentrated time together, and we went on a couple of fun outings.

After the first week, we moved into a small, furnished, two-bedroom apartment at the EQEB (Quito School of Biblical Studies), which also houses the Colón Church of Christ. Interestingly, this is the second time in our married life that Rusty and I find ourselves living temporarily in a church – the first time was right after we moved back to Japan, when we spent about a month living in the Hitachi-Taga Church of Christ! It is pretty tight quarters, but I think we’ll manage for a few weeks. Our plan was to live here until we find a house and our container arrives. Amazingly, we have already accomplished the first part – finding a house! We thought it would take us much longer to find something both suitable and within our budget. But, the third house we looked at was pretty nearly a perfect fit. Rusty signed the contract on Monday and we will get the keys this Friday. So, technically, we could move in anytime. But we would be sleeping on the floor and cooking over an open fire in the backyard because all of our things are still in the States. The folks at Healing Hands will hopefully be shipping our container sometime next week, but it could still be awhile before it gets here. So, I think we will stay put for the time being.

A good thing about living here at the EQEB temporarily is the location. We are right downtown, and close to many of Quito’s plethora of Spanish language schools. We spent yesterday and today visiting several of them to find out about their prices and services. We hope to make a decision and start classes by next week. I have actually been pleasantly surprised by how much Spanish I understand, thanks to all the time spent studying Portuguese. Speaking is a little more difficult, so I’m looking forward to getting into the classroom and actually learning the Spanish so that I’m not constantly guessing at words and how to pronounce them when I talk to people! Living here, we will also have the opportunity to practice our Spanish with the students and staff.

Here are a few pictures from our first couple of weeks:

Written the week before we left the U.S. for Ecuador:

Recently, while at my parents’ house, I picked up a copy of the book The Third Culture Kid Experience: Growing Up Among Worlds by David C. Pollack and Ruth E. Van Reken (Intercultural Press, 1999). It is a wonderful book, which I highly recommend to anyone who is a TCK* or is raising a TCK. One of the authors, Dave Pollack, came to Kenya when I was a senior in high school to do a weekend Reentry Seminar with all the graduating seniors at Rosslyn Academy. It was something he did every year at the time, trying to give all of us who were getting ready to leave Kenya and head off to college the tools both to leave well and to enter the new phase of our lives well.

There is one tool that has stuck with me through the years, through all of the many transitions I have faced, and that is the idea of building a “RAFT.”

Click here to continue reading.
Posted by Laura at 11:43 AM No comments:

Stephen turned three at the beginning of April. Since we were busy making the final preparations for our move to Ecuador, I just didn't have it in me to plan a huge, elaborate party. Stephen had been begging to go to Jungle Java again for awhile, so we invited a few of his friends from church to meet us there for a play-date one morning. Then, we headed over to the Livonia church and had lunch on the playground, followed by cake and ice-cream. It was a simple party, perfect for a 3-year old.

Benjamin is now seven months old. He is sitting up very well and starting to rock forward from a sitting-up position to try to get up on his hands and knees. Although he still has a ways to go before he is officially crawling (thank goodness!), he is getting more and more mobile. He has figured out that he can get from point A to point B by rolling over several times, and he is also starting to "army crawl" when he is on his tummy.

Ben continues to eat with gusto anything you put in front of him. This month, he also finally started taking a bottle, much to my relief. I have been having supply issues for awhile, which I think is mostly related to how stressful the last few months have been and how difficult it's been to maintain anything resembling a schedule while traveling. Although I'm grateful to have the option of formula feeding, I also recognize that this is the beginning of the end of my nursing days, and that is bittersweet.

During Ben's seventh month, we went to Chicago for our visas, so now he has an Ecuadorian visa in his passport! How many 7-month olds can say that? I do think it's pretty crazy (and a testament to our globally nomadic lifestyle) that he will have lived on 3 continents before his first birthday. At the end of March, I took Ben in for another well-baby check-up, and he now weighs 17 pounds! He got four more shots, plus an oral vaccine, so we are now mostly caught up.

Speaking of vaccinations, I came home from the doctor visit feeling a little frustrated because all my kids have had vaccines in so many different places, due to all our moving around. It is getting harder to keep track of it all, and harder for the nurses and doctors to figure out exactly what it is they need, especially when you factor in that other countries follow different vaccination schedules than we do in the U.S. For example, in Portugal, the BCG vaccine (for tuberculosis) is still standard at birth (it is not in the U.S. and hasn't been for years), and they start vaccinating for meningitis at 3 months (in the U.S., they wait until junior high school). I have at least 2 different vaccine records for each of my children, and Alex also has his "international yellow book" since he had the yellow fever vaccine before we went to Angola in 2008.

I decided that I needed to find a way to keep a record of all their vaccines in one place. A quick Google search turned up this little gem -- a free downloadable blank vaccine record done in Excel. I love that you can not only print copies and fill them in by hand to take with you to doctor visits, but also save it to your computer. I am planning on creating an electronic version for each of the boys so I always have a back-up in case the paper versions ever get lost or destroyed. Eventually, I plan to do one for Rusty and myself also.

Okay, that was a little off-topic. Here's a picture of 7-month old Benjamin. I swear he gets cuter every month! 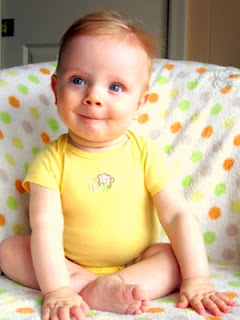 We finally got around to celebrating Alex's 6th birthday, about one month late. We had a party at Pump It Up, a bounce house, and invited all of his friends from the Livonia Church to celebrate with us. The kids had a great time bouncing on all the inflatables, followed by cake and ice-cream in one of the party rooms. 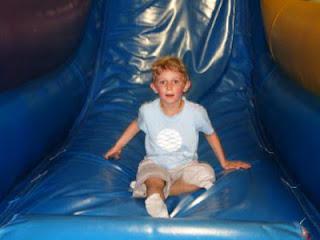 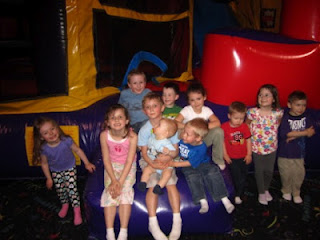 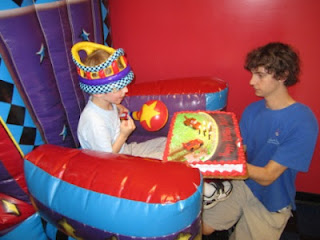 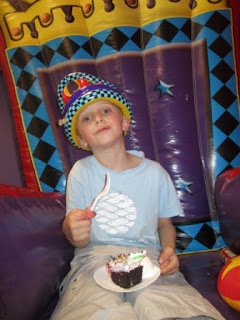 When we started planning his party, I asked Alex how he felt about using his birthday party as an opportunity to bless other less fortunate children instead of making it all about him and getting a bunch of presents he really doesn't need. I expected a lot of resistance, but he surprised me by being very enthusiastic about the idea. Instead of presents, we asked his friends to contribute money, which we then gave to World Vision, an organization that helps needy children. We sat down with the World Vision gift catalog and Alex picked out a $22 backpack filled with school supplies as his gift of choice. At his party, we collected enough money to purchase 6 backpacks, one for each year of his life! And honestly, he didn't even miss having presents to open! He still got presents from us, from his grandparents, and from the Angola Team, which he opened during a Skype phone call. But no presents at the actual party.

Happy Birthday, Alex! We are so proud of how you are growing and learning, for your tender heart and your energy and enthusiasm for life. We look forward to celebrating many more birthdays with you in the years to come!
Posted by Laura at 9:36 AM No comments: