Scroll down for the original "Sweet Moments" post and explanation.
I do plan on sharing some pictures soon -- "Top Ten" posts of Matt and Janille's wedding, and our family reunion in Hot Springs are in the works. For now, there are pictures on Facebook, or you can visit my sister's blog.
Posted by Campbell Family at 4:11 PM 1 comment:

We've been back in the States about a month now, and we have another month to go. One thing I decided to do when we first got back was to record in my journal some of the "sweet moments" of this time back in the U.S. There isn't a lot of time for journaling and personal reflection when you're on the road, fundraising, visiting family and friends, shopping, and running around like crazy gathering paperwork for your visas. However, it doesn't take long to jot down a few things every day or two, and it keeps me mindful of the blessings that we are experiencing, even in this hectic time. Here are some of the sweet moments so far (excerpted from my journal):

One of the summertime treats in Portugal is caracóis, or snails! Yep, you read that right. We first had the opportunity to try them on our field trip to Sintra. I only had one or two, and this because I finally caved under the intense peer pressure being put on me by my teammates. They really aren't that bad if you don't think too hard about what you are actually eating (which can be difficult since you have to remove them from the shell with a toothpick). The texture reminded me of mushrooms, and they take on the flavor of whatever they are cooked in, which in Portugal is onion, garlic, and bacon.
Alex was in school on the day of our field trip, and he was intensely jealous when he found out that we had all eaten snails without him. He begged for days to try snails, so one afternoon, just before we left for the U.S., we took a walk down to a local café and ordered a large plate to share. I wondered if Alex would really go through with it; I half thought he would chicken out when it came down to actually putting one in his mouth. However, to my great surprise, the kid who turns his nose up at asparagus and spinach ate his first snail without batting an eye, then smacked his lips and announced, "Mmmmmm, that was good! I want another one." I guess I shouldn't be surprised... he does, after all, like green tea and curry, two things most four-year olds wouldn't touch with a 10-foot pole. 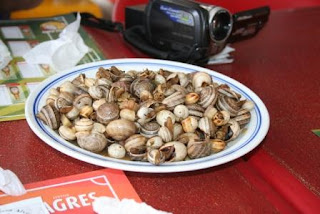 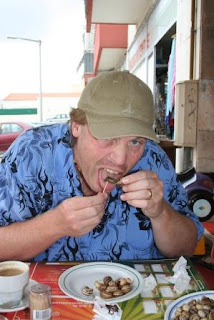 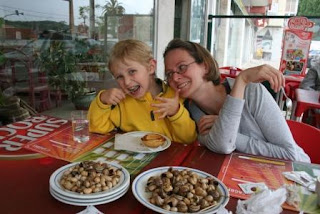 And after the snails... a pastel de nata, another of Alex's favorite Portuguese treats. 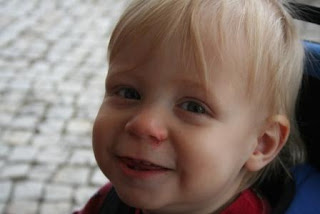 Stephen tried snails, too, but wasn't too impressed.
Posted by Campbell Family at 11:00 PM 1 comment: