I'm blogging over at the Angola Team's website today about our recent presentation to a church in the Lisbon area about our plans for Angola. Click here to read all about it. It was my first time to speak publicly in Portuguese, but thanks to a lot of preparation and practice, I was able to get through it without too much difficulty.

Then, while you're over there, stick around for awhile and check out the website... read an article or two... and sign up to receive our e-updates if you haven't already.

And, just in case you haven't heard the news via Facebook, Twitter, or email, our teammates all received word that their Angolan visas were approved last week! Well, all except for Robert... no one is quite sure what is going on with his, and we are all praying hard that he receives it soon so he can travel to Angola with his family. Please join us in praising God for this wonderful news and in our continuing prayers for Robert's visa.
Posted by Campbell Family at 7:23 AM No comments:

I mentioned in my last post that we have a car now. It's just a loaner from some friends who are on furlough for a few months, although we are looking to purchase another car around the time they return. Having a car has been a great blessing to us, first of all because it drastically cuts down on the amount of time that we spend getting from point A to point B. For example, it used to take Rusty or me the better part of an hour to go pick Alex up from school and bring him home each day -- 15-minute bus ride, followed by a 10-minute walk to the school, a 10-minute walk back to the bus stop, and then another 15-minute bus ride home. We could almost walk there and back in that same amount of time, except that we would be walking up a giant hill. Now that we have a car, we can literally get there and back in under 20 minutes.

A couple more examples: getting to church from our apartment used to take at least 45 minutes via bus, metro, and walking, and that was if we timed all of our connections just right and didn't spend too long waiting for a bus. Now, we can get there on a Sunday morning in about 20 minutes. And we can get to the closest beaches in about 30 minutes, whereas the same journey would take about 90 minutes via bus, metro, and train. Obviously, when traffic is heavy, things take longer. Still, though, I am amazed at how much closer everything seems now that we can get to it by car. Riding public transportation can really skew your perspective when it comes to distances between locations -- at least it did for me. Of course, there are some definite advantages to public transportation, and I am certainly thankful that Europe has such an efficient and reasonably-priced public transportation infrastructure. It is entirely possible to live without your own vehicle here -- maybe not as convenient, but certainly possible. As I get bigger and more uncomfortable with this pregnancy, though, I am also thankful that I am not having to deal with maneuvering my way on and off of crowded buses or metros, or running to catch them!

Another thing that having our own car has done is really opened up our possibilities for exploration further afield. We noticed this feeling in Japan as well, once we purchased our van after living there for 6 months with nothing but bikes for transportation. There is a definite sense of freedom that having your own set of wheels brings. You feel like you can go anywhere! In the last couple of months, we have taken advantage of several opportunities to get out and see some things outside of Lisbon that are more difficult to access via public transportation:

At the beginning of April we visited the little town of Óbidos. We went for the Chocolate Festival, which, although it sounds really cool, was actually pretty lame and certainly not worth the 7 euro per person entrance fee we paid. But the town itself is very quaint and cute, and I would love to go back and spend more time there when it isn't packed with festival-goers. 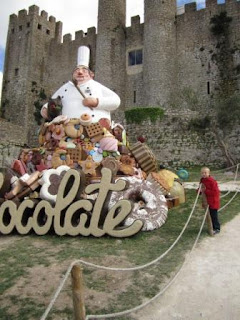 Alex posing in front of one of the festival decorations
Towards the end of April, we visited Mafra and toured the Palácio de Mafra (Mafra Palace), which is actually a massive combination palace-monastery, so big it would be very easy to get lost in, without all the signs marking your route! Here are a few of the more impressive highlights: 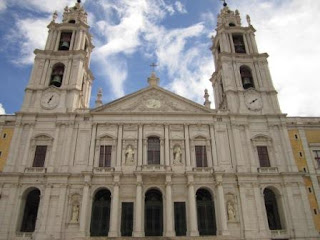 The main facade and entrance into the church 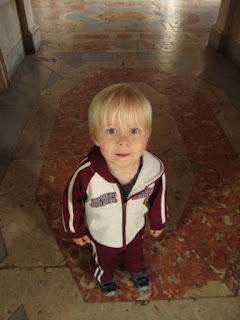 This little guy was our guide for the day! He had so much fun running up and down the long corridors. 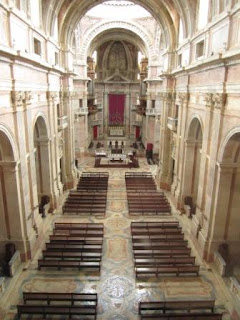 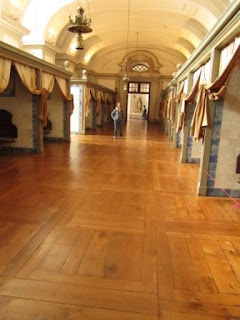 The hospital, where the monks cared for the sick. On either side of the corridor, you can see the little curtained cells for the patients. 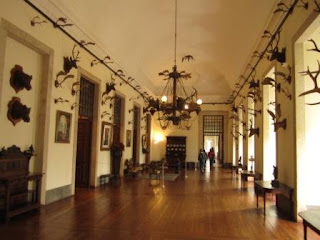 The trophy room... in addition to all the trophies on the walls, the furniture and the candelabra are all made from antlers! 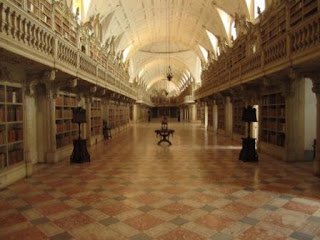 Saved the best for last... this was definitely the highlight of the whole tour, the library. It is home to some 40,000 15th to 18th century leather-bound books. Stunning! It reminded me of the library in "Beauty and the Beast."
After our tour, we ate our picnic lunch and let Stephen play for a bit at the nearby craft village in the town of Sobreiro. It was a combination of museum and playground. There were displays of traditional Portuguese shops, miniature villages with windmills, waterwheels, and trains, and of course, lots of places to climb, explore, and play. Stephen really enjoyed himself, and we decided we'd like to come back when we can bring Alex (he was in school on the day we went). 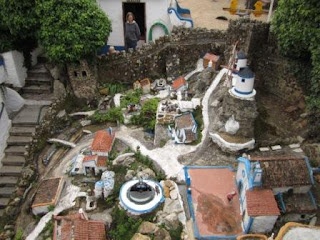 One of the miniature villages... it even had a river with real water that flowed through the village and turned a waterwheel.
Posted by Campbell Family at 6:43 PM No comments:

For May's field trip, we made another trip to Sintra, a hop, skip, and a jump away from Lisbon. We have been to Sintra several times now, but there is so much to see there that each time, so far, we manage to see or do something new. This time, we toured the Palácio de Pena (Pena Palace). We had a picnic lunch on the grounds and then enjoyed wandering around for a little while. There are many species of exotic trees and plants there, including a few California redwoods! Then, because we have a car now (just a loaner from some friends who are on furlough for the next several months), Rusty and I drove out to see the Convento dos Capuchos, also known as the Cork Convent. We ended our day with a visit to a café in Sintra to load up on some of the local pastries, queijadas and travesseiras. Yum! 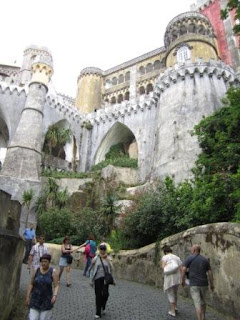 This is the view of the palace as you are walking up to the entrance. It is pretty impressive.
They don't allow pictures of the inside of the palace, but most of the furnishings are original and equally as impressive. Here are a couple more shots of the outside: 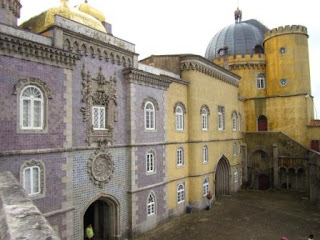 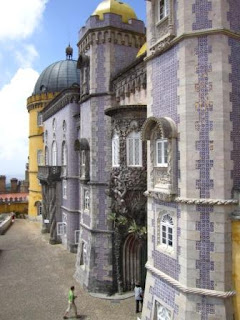 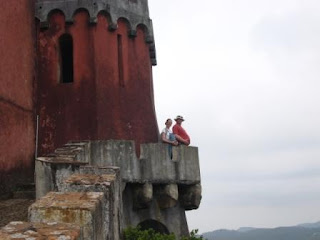 Whose belly is bigger? 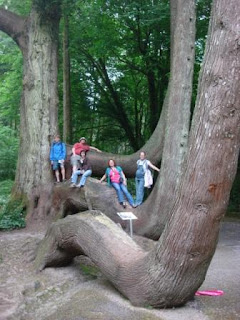 Our group, posing on a Western red cedar. This is all one tree -- the lower branches form a J shape and put roots down into the soil where they touch the ground. 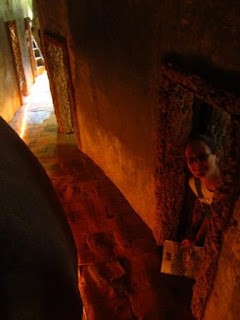 Inside the Convent dos Capuchos. Somehow, I managed to squeeze my pregnant bod inside this tiny monk's cell. The doors are cut small, supposedly so the occupant had to bow in humility to enter!
Posted by Campbell Family at 10:11 AM No comments:

Email ThisBlogThis!Share to TwitterShare to FacebookShare to Pinterest
Labels: Life in Portugal

On April 1st (my birthday), we took a field trip to the other side of the Rio Tejo to see the Dom Fernando II e Glória, an old frigate and Portugal's last sailing warship. It is currently being restored to its original condition as a museum ship. After touring the frigate, we visited the Cristo Rei statue, nearby. We had a picnic lunch in the statue's shadow and then rode the elevator to the top for fantastic views of the river and the city of Lisbon on the other side. 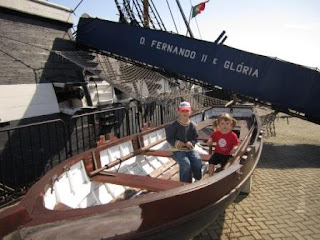 Alex and Eliana in one of the ship's lifeboats 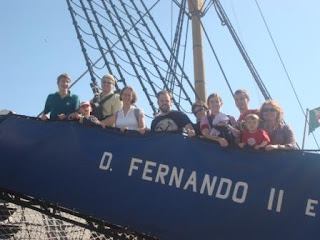 Our group, posing on the gangway 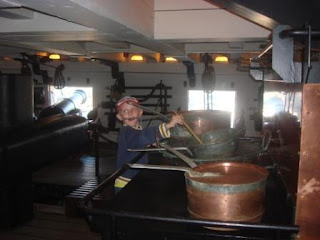 Alex, pretending he is a cook in the ship's galley 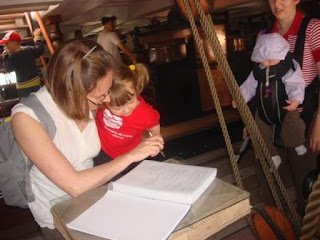 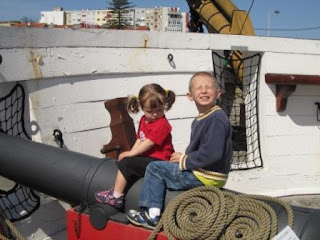 Attempt at a cute cannon shot ("The sun's in my eyes, Mom!") 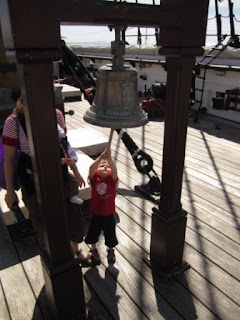 Eliana trying to ring the ship's bell. She was just barely too short to make it work, so Daddy had to help her. 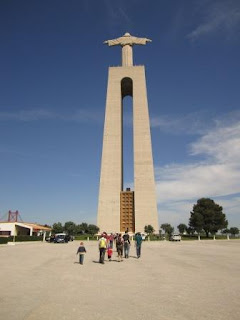 The Cristo Rei statue from the back... 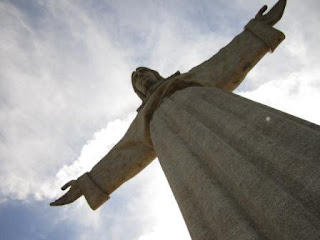 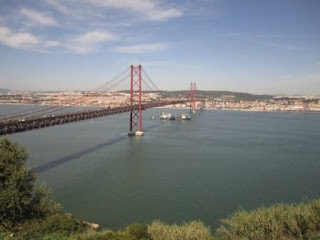 View of the Rio Tejo and Lisbon on the other side. The bridge is the Ponte 25 de Abril, Lisbon's own "Golden Gate Bridge." 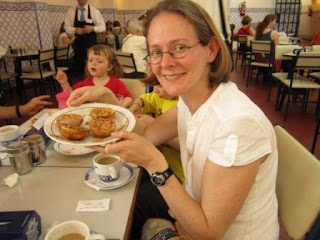 Happy birthday to me! On the way home, we stopped in Belém for yummy pasteis de Belém and coffee. These things are to die for, especially fresh out of the oven when the custard filling is still warm and the pastry is golden and flaky!
Posted by Campbell Family at 9:49 AM No comments:

There's been a lot going on around here lately. I guess that's why I haven't done much blogging. I've been going through our pictures, trying to organize them somewhat, and thought it would be fun to share some photos of some of our recent sight-seeing. First off, I'll share about the last several field trips we've taken with Eunice. In February, we toured Lisbon's elevadores, or lifts. Three of the four are old funiculars (see a picture of one here). The fourth, the Elevador de Santa Justa, is Lisbon's only true vertical lift. We can ride all of them free with our bus passes. Here are a few pictures: 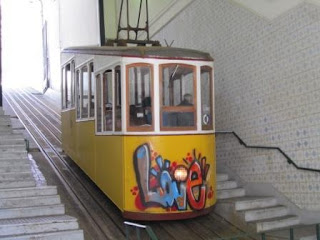 One of the funiculars 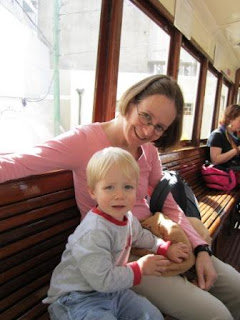 Stephen and me inside the car 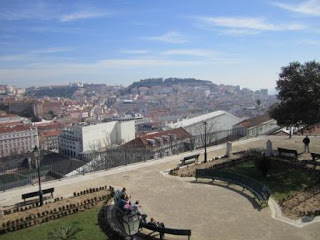 Fabulous view from one of Lisbon's miradouros (viewpoints)
Posted by Campbell Family at 9:48 AM No comments: 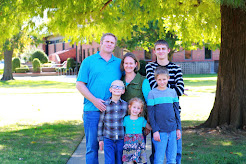 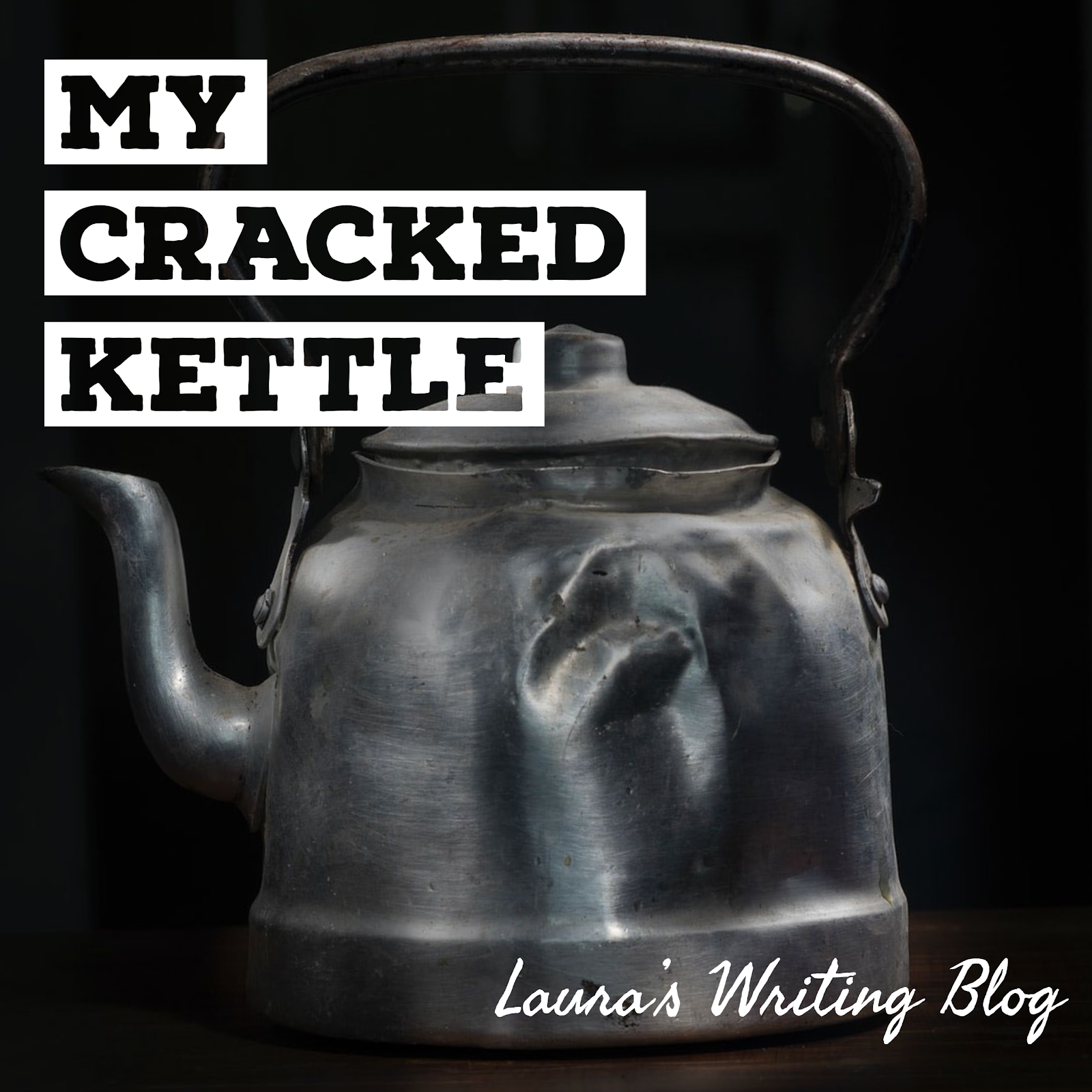