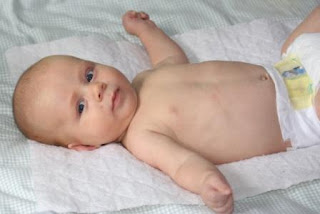 Stephen turned two months old on June 6th while we were up at Torch Lake. Our itty bitty baby isn't so itty bitty anymore. At his two-month check-up, he weighed in at over 13 pounds! By comparison, Eliana Reese (our teammates' baby), who is 7 months older, weighs 16. I think he might pass her up before she has her first birthday! Every time I take him in, the doctor comments on how well he is growing and how solid he is. This time, he asked me, "How do you hold this kid? He is heavy!" I guess toting him around all day will help with losing the baby weight, which, sadly, is not coming off as quickly this time as it did the first!

During his second month, Stephen started smiling (relationally, not just gas). Rusty is especially good at getting him to break out in a big grin. He also discovered his hands, and seems to have a special fondness for the thumb on his left hand. Maybe he will be a thumb sucker. (Alex never was.) I have had to start bathing him in the big bathtub since he is too big now for the kitchen sink (thanks to my sister for leaving me her awesome baby bath chair). He loves baths, just like Alex did. He also enjoys sitting in his bouncy chair (a recent yard sale purchase), and being outside on a blanket under the trees. He can hold his head up really well now, and is already starting to push up with his feet on my lap.
Posted by Campbell Family at 9:55 PM